A small article detailing the current scenario of the Global Economy. It says that world is witnessing K shaped recovery. There are two more easy facts for you. Read it once and understand.

These topics are one of the favourites of UPSC. With COVID-19 pandemic, India’s multidimensional food challenges came to the forefront. Now, the topic gets even more important. The article tells how the pandemic has impacted the food security and what is the role being played by different institutions. The article also gives some data and few points as way forward. Read the article completely.

The next ‘Asian miracle’: Vietnam is exporting its way to prosperity, while leaving no one behind at home: Times of India

The ongoing pandemic didn’t affect Vietnam deeply as the country in the beginning stage itself effectively contained the spread with efficient contact tracing and breaking the chain. But this is not the news. The article very beautifully discusses the recent measures being taken by Vietnam with which it has become the world’s fastest growing economy this year. Analyse these measures and think whether India has any of them. If yes, how effective? If no, why? And how can we bring them. You can cite Vietnam as an example as well. A must read for all.

You need subscription to read news from Business Standards. If you have, just click on the link above. For those people who don’t, don’t worry we will provide you the whole article here. Just read it thoroughly and understand. 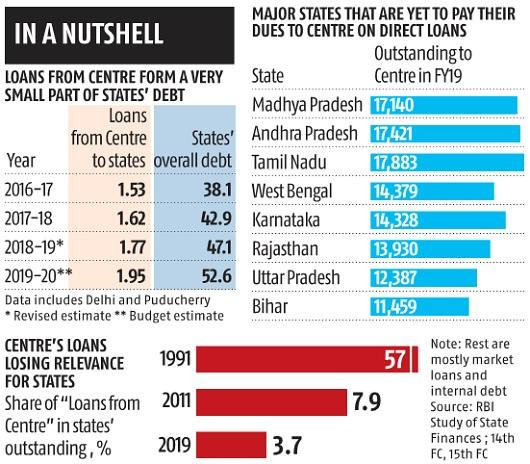 On Monday, the central government announced a “special interest-free 50-year loan to states” worth Rs 12,000 crore. While its small quantum is being debated, the long term appears to have sown the seeds for the Centre’s near-perpetual control of states’ financial borrowing from markets, courtesy a provision in the Constitution.

Article 293 (3) of the Constitution mandates a state to seek Centre’s approval for any borrowing from the market — and here’s the important part — so long as the state has outstanding debt towards the Centre. To be sure, all states are currently indebted to the Centre, in some or the other way, and none would be able to borrow without the Centre’s permission.

However, data shows that states’ outstanding towards the Centre is in decline. In fact, the 14th Finance Commission had noted that two states could become debt-free from the Centre by 2025, and the rest by 2030, subject to fulfilling some conditions.

Even if a single state becomes debt-free from the Centre, it would not require the latter’s approval to raise money from the market to finance its fiscal deficit. It can borrow independently, subject to the limits set by the Fiscal Responsibility and Budget Management laws.

But the proposed 50-year loans, in a way, ensure that states remain indebted to the Centre till 2070. This is based on the assumption that states do not pre-pay the loan principal before the 50-year period. “Unless the modalities about the early repayment are clear, the states will remain in a 50-year lock-in for taking in a very small amount of Centre’s loans on its books,” said a public finance expert, who has worked in an executive capacity with the government in the past.

Though it may seem as though this provision gives the Centre more control through the power of consent, it is a much needed provision, said Pinaki Chakraborty, director at the National Institute of Public Finance and Policy. “These hard Budget constraints, such as the one enshrined in the Constitution, are extremely necessary, as the onus of macroeconomic stability lies with the Centre, and states are relatively free from that responsibility,” he said.

States’ borrowing has assumed importance in recent months. Firstly, states needed to borrow more to survive the revenue shock arising from the pandemic, which the Centre controlled by laying down certain conditions.

Secondly, the extra borrowing needed to bridge the revenue shortfall arising out of the implementation of the goods and services tax (GST) implementation, will also now be borrowed by the Centre and given as back-to-back loans to states, as the former said in a release on Thursday. This will further increase the states’ outstanding towards the Centre.

However, there has been a gradual decline in states’ indebtedness to the Centre, and a growing clamour for making states’ borrowing more independent.

Loans from the Union were the primary resource of deficit financing for states till the 1990s, occupying 57 per cent of states’ outstanding debt in 1991, according to the 14th FC report. It has reduced to less than 4 per cent in 2017-18. The Centre’s outstanding loans to states form less than 1 per cent of GDP now, from 5.9 per cent in 2004-05.

Taking a note, a report commissioned by the 15th Finance Commission bats for a gradual loosening of Centre’s control, and a move towards states’ autonomy in borrowing.

“The Constitution may limit the Centre’s role (in state’s debt regulation) to one that is largely in terms of sanctions for violation of ceilings, and in the event of default,” a report, prepared by Vidhi Centre for Legal Policy, recommended. “The proximate control of the Centre in maintaining state fiscal responsibility is unlikely to strike this balance well in the long run,” it added.

C Rangarajan, who headed the 12th FC, said it was the first to explicitly talk about gradual independence to states in terms of borrowings. “It was only then that states began borrowing more from the market, breaking the old way of borrowing indirectly from the market, through the central government,” he told Business Standard.

The 14th FC, too, discussed decentralisation of market borrowings in detail. Kerala had even told the 14th FC that as the existing fiscal rules restrict borrowing beyond a limit, either all or 50 per cent of past central loans be waived, along with interest, to break free from this small but long overarching debt.

Experts said that there could have been better ways of financing states’ capex. “The capex loan is interestingly designed. However, at this small scale, it could well have been in the form of grants to states,” Aditi Nayar, principal economist at ICRA, said. “Loans like these on a larger scale would have helped to prevent the expected cut in capex that states are likely to have to resort to. But the small size of the loan may offer limited incentive,” she added.

Send To My Bookmarks