How to start to learn any scheme? Introduction. 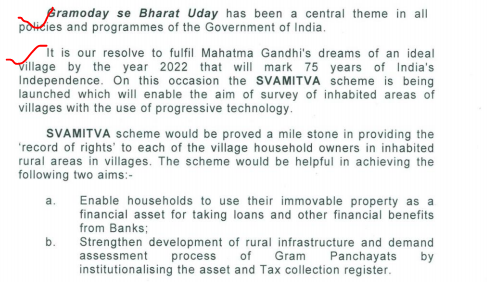 Why Land is important? Why we need proper survey?

The scheme is for surveying the land parcels in rural inhabited area using Drone technology. The survey shall be done across the country in a phase wise manner over the period of four years (2020 -2024). The scheme is proposed as a Central Sector scheme with a projected outlay of Rs 79.65 crores for the pilot phase (FY 2020 -21). 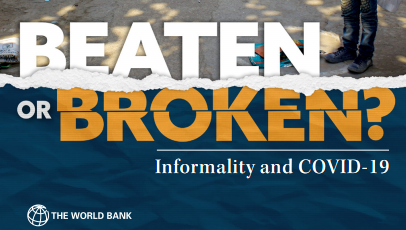 If we write anything related to this report, there will be no use. You will never remember. So, few important charts we have taken from report.

South Asian countries have been compared and finally India’s projection has been estimated. Now see below: Don’t make any notes. Just see how COVID-19 Pandemic has changed indicators and how indicators improving now. 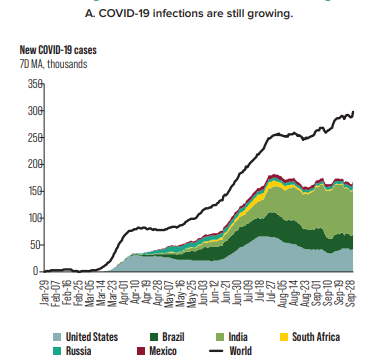 The pandemic may cause up to 5.5 million students to drop out from the education system. The impact on learning is equally enormous. Children have been out of school for approximately 5 months. Being out of school for that long means that children not only stop learning new things, they also forget some of what they have learned. The projected learning loss for the region is 0.5 years of learning-adjusted years of schooling (LAYS), falling from 6.5 LAYS to 6.0 LAYS, an enormous setback from recent advances in schooling.

What is the ‘Learning Adjusted Year of Schooling” (LAYS) concept?

Introduced by the World Bank, it seeks to combine access and learning outcomes into a single measure. It combines quantity (years of schooling) and quality (how much kids know at a given grade level) into a single summary measure of human capital in a society.

The COVID-19 pandemic has triggered an unprecedented crisis in South Asia’s tourism economy. The estimated losses to amount to over USD 50 billion in the travel and tourism sector and that about 47.7 million jobs—many held by women and vulnerable groups working in the informal sector—are at risk due to the COVID-19 pandemic. 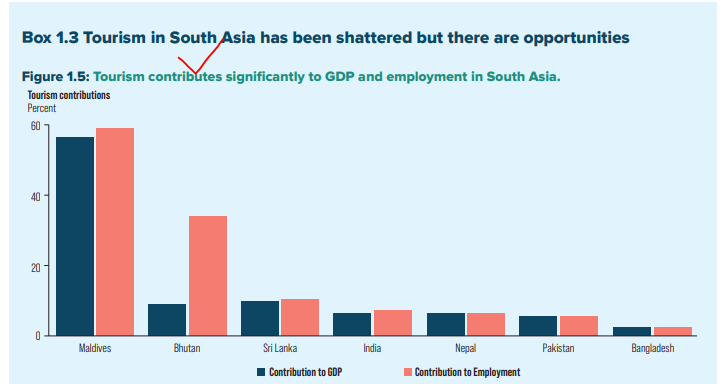 In India, electricity consumption is strongly related to overall economic activity. Electricity is an input to activities throughout the economy, from industrial production to commerce and household activity, and changes in its consumption thus reveal information about these activities. See data of India below: 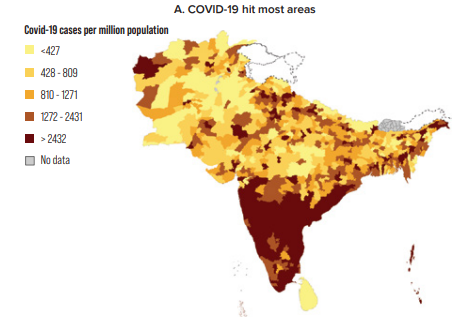 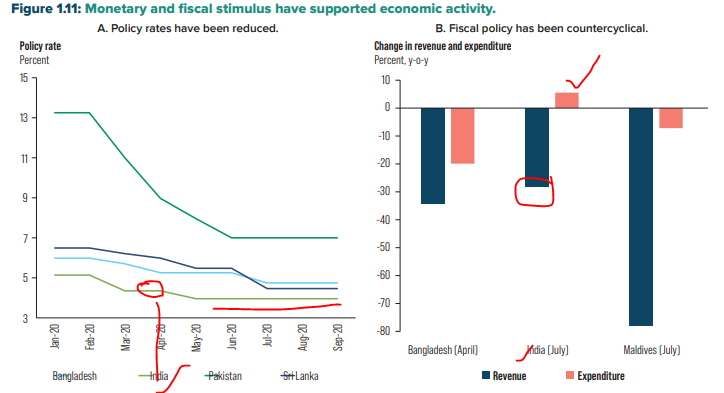 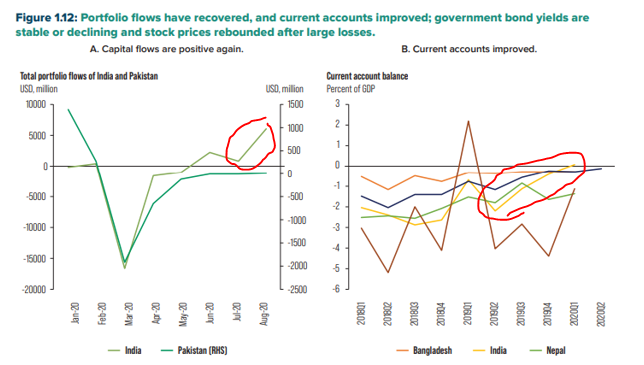 Finally, it conclude for India as: 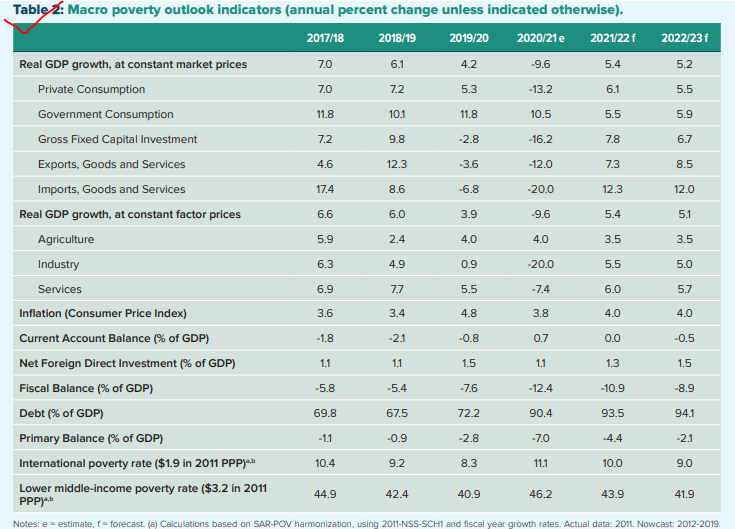 Coronaviruses are a large family of viruses that can cause diseases ranging from the common cold to Severe Acute Respiratory Syndrome (SARS).

Although most of human cases of MERS-CoV infections have been attributed to human-to-human infections in health care settings, current scientific evidence suggests that dromedary camels are a major reservoir host for MERS-CoV and an animal source of MERS infection in humans.

No vaccine or specific treatment is currently available, however several MERS-CoV specific vaccines and treatments are in development. Treatment is supportive and based on the patient’s clinical condition.

India is at the eastern end of the distribution range of the one-humped camel (Camelus Dromedarius). As they have adapted to dry environments, camels do not thrive further east than the Aravalli Hills. Thus, their distribution in India is restricted to Rajasthan (where about 80 per cent of the camel population is at home), Gujarat and Haryana.

Krishna Peacock (Papilio krishna), Indian Jezebel (Delias eucharis), and Orange Oakleaf (Kallima inachus), the frontrunners, have unique features such as ability to camouflage as a dead leaf, exhibit iridescence to stave off predators, and aid farmers in getting rid of pests.

Three contenders for the National Butterfly:

Krishna Peacock (Papilio Krishna): It is a flagship species for biodiversity and conservation, is generally found in large numbers in the Himalayas.

If you remember 2020 question:

Recently, the city of Hyderabad received extremely heavy rainfall within a week resulting in flooding in many parts of the city. Government data indicates that the events of ‘very heavy’ & ‘extremely heavy’ rainfall events increased by more than 70% in the last 3 years.

We will see here recent developments and role various agencies and assistance provided to fight disaster.

As per the recent Home Minister data:

According to the Ministry of Home Affairs, floods, and heavy rains during the south west monsoon this year have claimed over 1503 lives as of 10 September 2020. In addition to this, over 7842 cattle were lost, and more than 2.75 lakh households were damaged. Crops in 20.75 lakh hectares were also devastated by the rains. West Bengal reported the greatest number of deaths, while the houses damaged in Odisha was the highest. 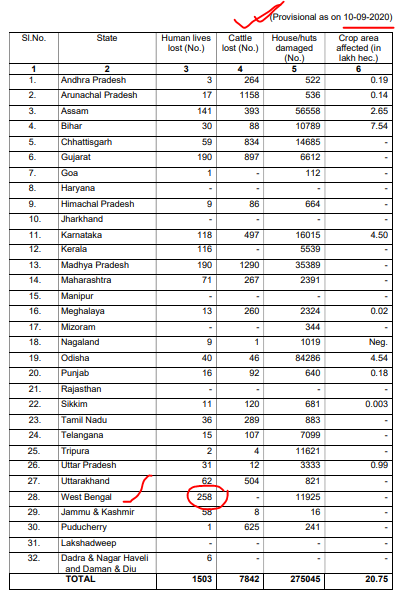 Frequency of cyclones and heavy rainfall events has increased 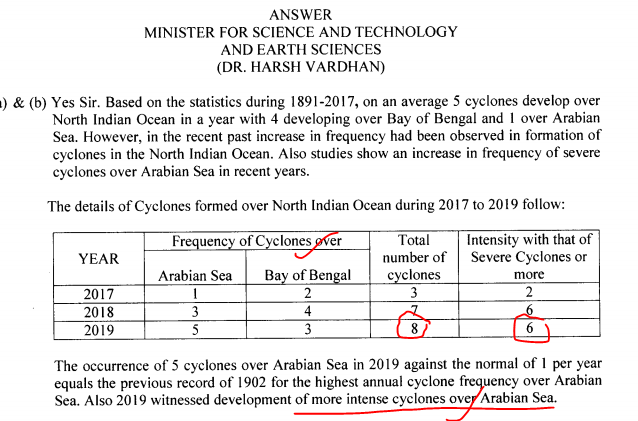 The Flood Management Programme under the Ministry of Water Resources was launched by the Central government during the XI five-year plan under which flood prone states are provided with financial assistance for flood management activities and anti-erosion works. The programme had a budget outlay of Rs. 10,000 crores during the XII plan and has been extended up to March 2021 as a component under Flood Management and Border Areas Programme (FMBAP). 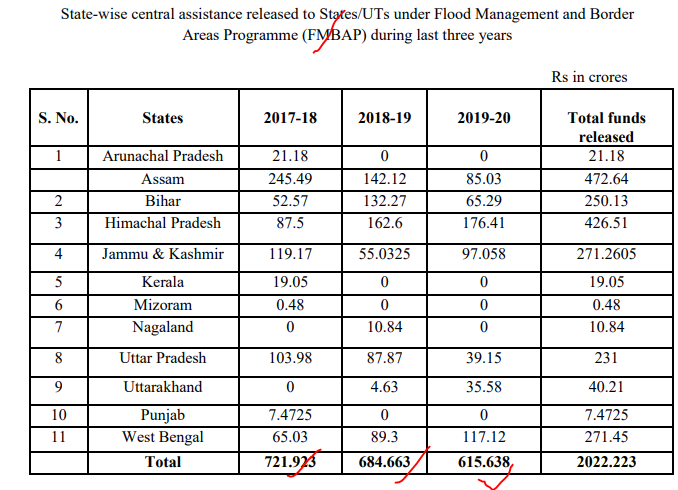 State governments have the primary responsibility of disaster response and management

The State governments have the primary responsibility of disaster response and management. State Disaster Management Authorities consisting of the Chief Minister as the chairperson draws up the state disaster management plans and is responsible for the implementation of the plan.

The state governments will have to assess losses and provide relief measures according to the severity of the ground situation through the State Disaster Response Fund. The State Disaster Response Fund (SDRF) constituted under Section 48 (1) (a) of the Disaster Management Act, 2005, is the primary fund available with State Governments for responses to notified disasters. The Central Government contributes 75% of SDRF allocation for general category States/UTs and 90% for special category States/UTs (NE States, Sikkim, Uttarakhand, Himachal Pradesh, Jammu and Kashmir).

Disaster management fund of Rs.11000 crores has been released by the Centre 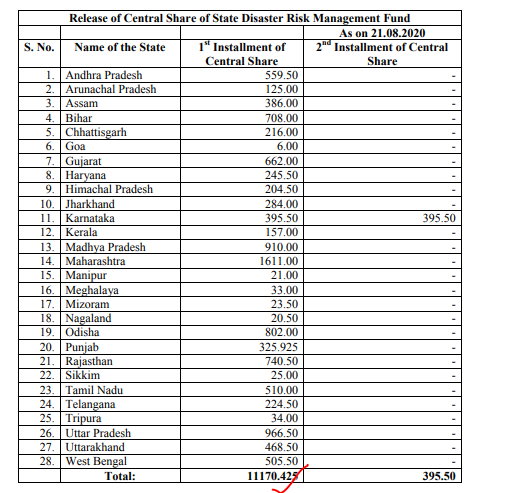