Doha Amendment to the Kyoto Protocol

The Kyoto Protocol was the first legal treatise to address climate change by cutting down of greenhouse gas emissions. It laid out quantified targets for developed countries to cut down their emissions and asked their developing counterparts to adopt national climate plans, funded by finance and technology transfer from developed countries.

The Kyoto Protocol to the United Nations Framework Convention on Climate Change was adopted in 1997 by the third Conference of the Parties in Kyoto (Japan). The Protocol obliges developed nations to reduce their collective greenhouse gas emissions by 5.2% (compared to 1990 levels) by the end of the first commitment period (2008–12). However, the United States – at the time the world's number one emitter – did not ratify the Protocol, seriously limiting its effectiveness. Canada withdrew from the Kyoto Protocol in 2011.

The Doha Amendment establishes the Kyoto Protocol’s second commitment period from 2013-2020. It was adopted at the eighth session of the Conference of the Parties serving as the Meeting of the Parties to the Kyoto Protocol (CMP 8), in Doha, Qatar, in 2012. During this second commitment period, Parties committed to reduce GHG emissions by at least 18 percent below 1990 levels in the eight-year period from 2013 to 2020.

Has India ratified it?

The second commitment period of the Kyoto Protocol was adopted in 2012 and the ratification period began in the beginning of year 2013. Of the total 192 parties to Kyoto Protocol, 144 ratifications are needed for the amendment to come into force. Recently, Nigeria became the 144th country to ratify the amendment.

The Doha amendment was to determine the course of climate action from 2013 (when the First Commitment Period ended) to 2020 after which the Paris Agreement will come into force.

Ok, this is very important now:

These mechanisms ideally encourage GHG abatement to start where it is most cost-effective, for example, in the developing world. It does not matter where emissions are reduced, as long as they are removed from the atmosphere.

This has the parallel benefits of stimulating green investment in developing countries and including the private sector in this endeavour to cut and hold steady GHG emissions at a safe level. It also makes leap-frogging—that is, the possibility of skipping the use of older, dirtier technology for newer, cleaner infrastructure and systems, with obvious longer-term benefits—more economical. 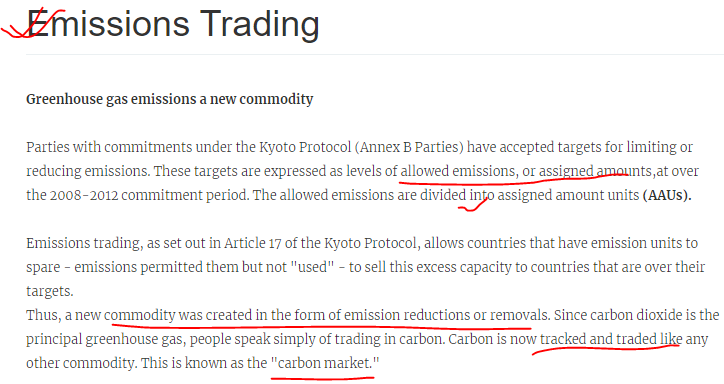 NCRB 2019 report on Crimes against Women

More than 4.05 lakh cases of crimes against women were registered in 2019, an increase of 7.3% compared to the year 2018, reveals the National Crime Records Bureau Crime in India 2019 report. 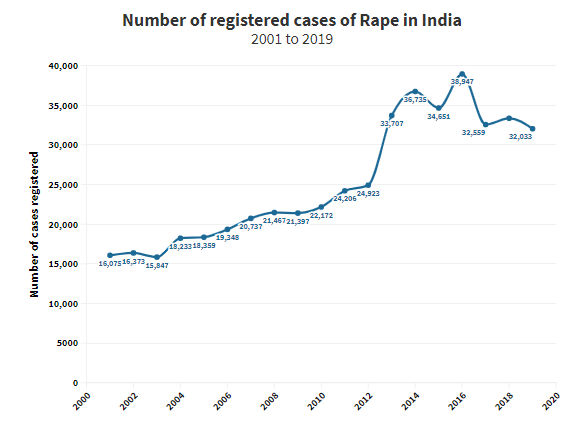 85% of the rape cases registered in 14 States/UTs

A total of 5997 rape cases were registered in Rajasthan in 2019, the highest for any state. Rajasthan accounted for 19% of all the registered rape cases in the country in 2019. Uttar Pradesh, which recorded the highest number of crimes against women in the same year had reported 3,065 cases of rape, the second highest in the country. Madhya Pradesh, Kerala, and Maharashtra had reported more than 2000 cases each. 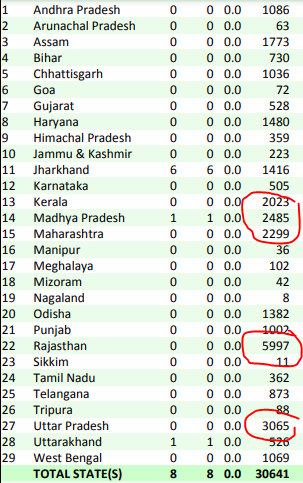 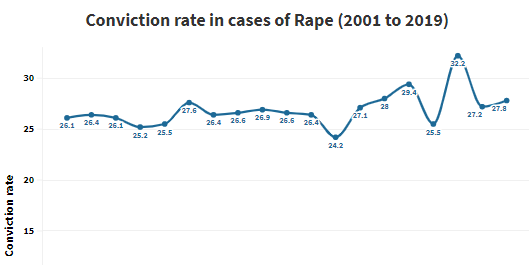 The overall conviction rate in cases of crimes against women, including both IPC and SLL crimes in India was the highest in 2010 (at 27.8%) over the last 10 years. The conviction rate dropped to a low of 18.9% in 2016. Since 2017, the rate has been between 23 to 24%. The major reason behind this is the lower conviction rate in cases registered under section 498A, ‘Cruelty by husband and relatives’ (domestic violence cases) which, as already noted, accounts for almost one-third of the cases of crime against women. 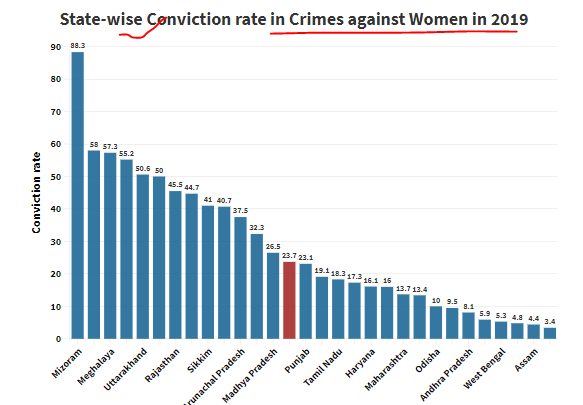 If we recall three most gruesome incidents, Nirbhaya incident in 2012, the veterinary Doctor’s rape and murder in Telangana in 2019, and the recent Hathras incident in Uttar Pradesh, the situation doesn’t seem to have changed much.

We will introduce to you with beautiful paragraph:

According to the recently published Desertification and Land Degradation Atlas of India, 96.4 million hectares – making up 29% of the country’s total geographic area – became degraded from 2011 to 2013. The most important process of degradation was water erosion, which contributed to 11% of the total degradation.

Why is water, which should be enriching our aquifers, degrading land? Agriculture accounts for 90% of India’s freshwater consumption and gets this water mostly from the ground. It’s also true that, according to the Central Groundwater Board, some 40% of our groundwater units are not in the ‘safe’ category. Both the Centre and state governments have been attempting different institutional, economic and technological ways to address the problem of groundwater depletion (if they are).

So as such, we are facing a potential crisis on two fronts: groundwater depletion and land degradation led by water erosion. In the longer term, both these forces will also accentuate the effects of climate change.

So, what should we do now?

In this regard, consider the concept called conservation agriculture (CA). It consists of three agro-ecological practices: no ploughing, maintaining a permanent soil mulch or cover, and diversification in the cropping system.

But CA ha slot of barriers. It has still not found place in India.

India’s precarious groundwater situation, land degradation and the threat of climate change all together make CA a desirable proposition – at least if we intend to tackle these challenges without comprising our agricultural productivity.

The Gross tax collections from the GST increased to 6-month high of Rs 95,000 crores in the month of September 2020. For the first time in the current financial year, the GST receipts were higher as compared to corresponding month of the Previous year.

This increase in the GST tax collections is considered to be significant because it highlights that Indian Economy is slowly limping back to normalcy after lockdown-imposed economic slowdown. The increase in the consumer sentiment accompanied by increased expenditure has helped boost the GST revenue. There has been uptick in other high frequency indicators such as PMI, Merchandise Trade data etc. which hints at possible economic recovery.

In this regard, let us have a look at the trends in the GST tax collections since its introduction in July 2017. 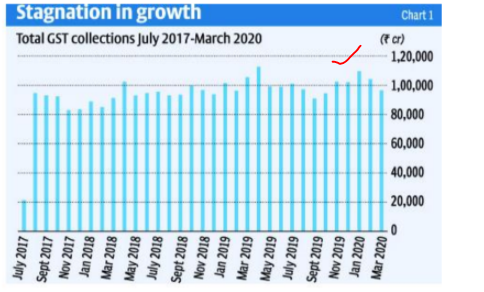 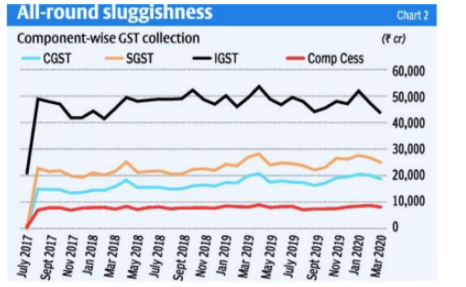 As Chart 1 shows, the total monthly collections from State (SGST), Central (CGST), and integrated (IGST) goods and services taxes and the compensation cess first crossed Rs 1 lakh crore in April 2018. But after that, there has been stagnation in GST revenue growth.

Share of different components of GST in decreasing order: IGST, SGST, CGST and Compensation Cess. As can be seen in chart 2, there has been sluggish growth in all the components.

Prime Minister Narendra Modi inaugurated the Atal Tunnel at Rohtang at an altitude of above 3,000 metre in Himachal Pradesh.

Feature and importance of the tunnel

Pir Panjal is the largest range of the Lesser Himalayas. Near the bank of the Sutlej River, it dissociates itself from the Himalayas and forms a divide between the Beas and Ravi rivers on one side and the Chenab on the other. 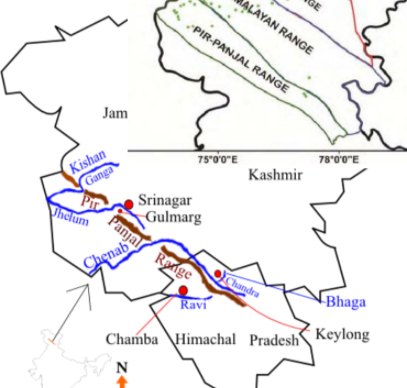