Relation between total Production and Procurement at MSP

See all the data carefully. Prelims exam needs this preparation only.

The MSP for Rice and Wheat, the largest produced crops has only marginally increased over the 10-year period (2011-21). For the Marketing year 2011-12, the MSP provided by the government for Paddy of Common type was Rs.1080 per quintal, while that of Grade-A paddy was Rs.1,110 per quintal. After a marginal increase year-on-year, there was a considerable increase for Marketing year 2018-19. For the Marketing year of 2020-21, the MSP for the two variants of Paddy is Rs. 1868 and Rs. 1888 respectively i.e. an increase by 73% and 70% respectively in these 10 years.

Meanwhile, the MSP for few of the coarse grains has increased considerably compared to Rice and Wheat.  The two variants of Jowar i.e. Maldandi and Hybrid have increased by around 165% during the 10-year period. 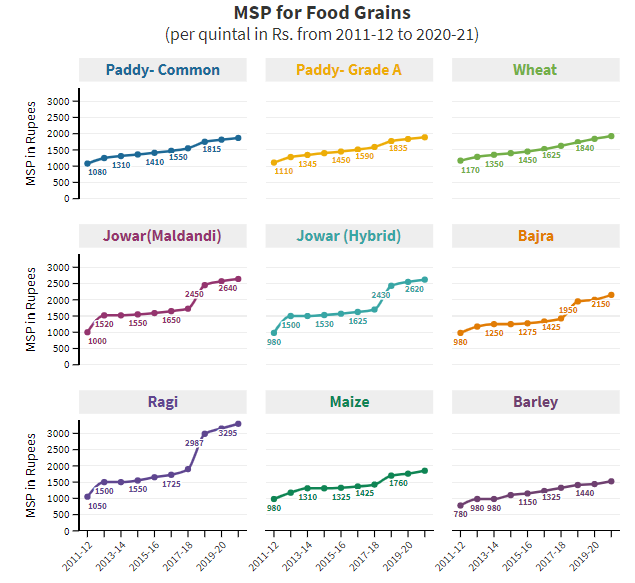 In 2015-16, the total wheat production in India is 922.88 lakh tons, whereas the procurement by the government was only around 25% of the total produce i.e. 229.62 lakh tons. This was also below the set procurement target of 330 lakh tones.

The quantum of MSP procurement is highly uneven across the states 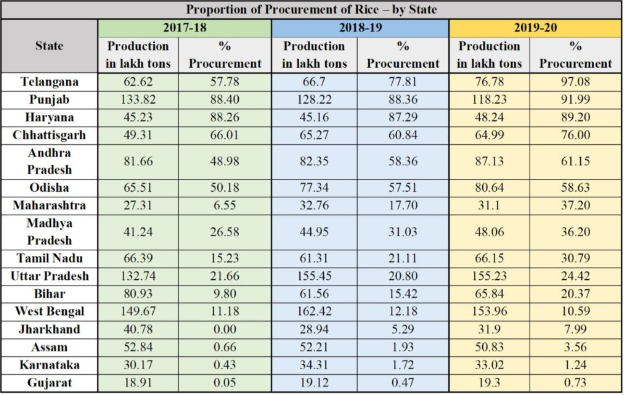 It is apparent from the data that the government procurement of Rice and Wheat at MSP across the states is highly uneven. MSP is helping the rice & wheat producing farmers, but only in a few states where the government is procuring substantial amounts. In the case of the other crops, the MSP procurement is very little across the country.

The U.S. is keen that India sign the last foundational agreement, Basic Exchange and Cooperation Agreement for Geo-Spatial cooperation (BECA), at the next India-U.S. 2+2 ministerial dialogue likely to held in October end.

Beginning 2016, India has signed three foundational agreements: The Logistics Exchange Memorandum of Agreement (LEMOA), the Communications Compatibility and Security Agreement (COMCASA) while the General Security of Military Information Agreement (GSOMIA) was signed a long time ago. An extension to the GSOMIA, the Industrial Security Annex (ISA), was signed at the last 2+2 dialogue.

Let us understand the agreements.

US requires its strategic partners to sign 4 foundational agreements to enable the strategic engagement including sharing of information, technology transfer, extension of logistic facilities etc.

Being a ‘Major Defence Partner’ of the US, it is imperative for India to sign the foundational pacts which allows greater interoperability between critical technologies and smooth facilitation of classified information. So far, India has signed 3 of the foundational agreements, namely, GSOMIA (in 2002), LEMOA (Logistics Exchange Memorandum of Agreement, 2016) and COMCASA (Communications Compatibility and Security Agreement, 2018).

This is an agreement signed to safeguard the information that is shared during a technology transfer. India signed this agreement in 2002, however so far this covered only Indian government and PSUs. Now with the defence cooperation deepening and most deals signed under Strategic Partnership model which includes the private sector, it is necessary to sign the ISA annexure to GSOMIA in order to safeguard information shared to private sector during the technology transfer.

Telukunchi village’s community in Andhra Pradesh welcomes Asian openbill storks every monsoon in the hope of good rains and prosperity. The community has framed rules to punish those who harm the birds. 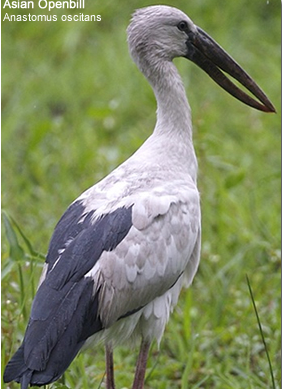 The Asian Openbill Stork ( Anastomus scitans) is one major species among the 11 stork species in Asia and apart from India it is found in small numbers in Pakistan, Bangladesh and Sri Lanka in South Asia. 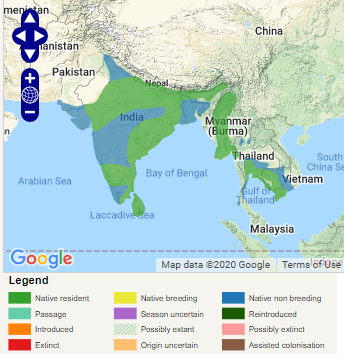 The storks migrate to north India in June and to the southern part of the country in November every year.

Spread over hundreds of hectares and home to a rich variety of wildlife, the Dumna Nature Reserve (DNR) in Madhya Pradesh’s Jabalpur area, is being threatened by a series of projects with the latest being a tiger safari, aimed at promoting tourism to the area. However, there is an ongoing movement to keep the reserve undisturbed and at least three public interest litigations (PILs) have been filed in the Madhya Pradesh High Court for this.

Dumna is among the most well-preserved ecological habitats in an urban area and it is also a catchment area for the Khanderi Lake which is an important source of drinking water supply to the city. It has a population of nine leopards, more than 2,000 deer, host of other wildlife such as cheetal, barking deer, four-horned antelope, jungle cat, Asiatic wild cat, wild boar, crocodile and more than 300 species of birds (both migrant and resident). 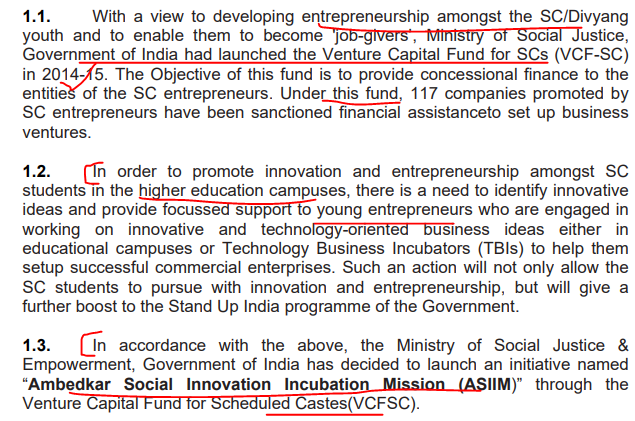 Who is eligible for support under ASIIM?

The ESG funds are increasingly becoming popular in the mutual fund industry in India. The ESG funds, which factor in the environment, social responsibility and corporate governance aspects of a company during investment, are sought after abroad. In India, their popularity is fairly new but is increasing rapidly.

Some of the challenges faced by SBIFMPL in starting the first ESG based fund and the strategy adopted to overcome the challenges: Just read 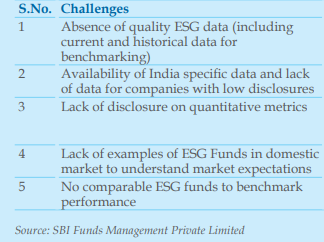 ESG Fund: This is important