India’s pharmaceutical industry relies heavily on import of Active Pharmaceutical Ingredients (APIs) and imports from China make up for almost two-thirds of it. 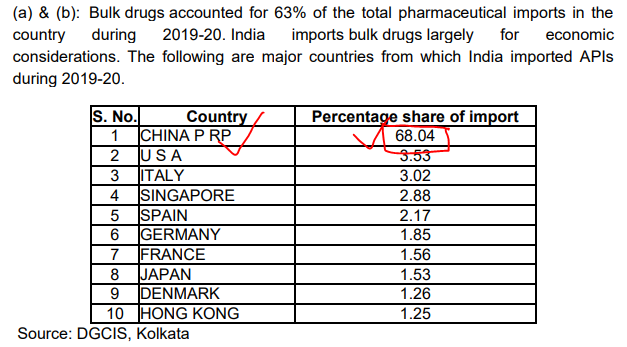 Noting this, the Technology Information Forecasting and Assessment Council (TIFAC) which is an autonomous organization under the Department of Science & Technology released a report titled ‘Active Pharmaceutical Ingredients- Status, Issues, Technology Readiness, and Challenges’ which calls for scaling up the production of API in India in order to make India self-reliant in API production and reduce import dependence, especially from China.

Active Pharmaceutical Ingredients, abbreviated as API, are chemical compounds which are used to manufacture medicinal drugs and cause pharmacological activity or give direct effect in diagnosis, cure, or treatment of disease. For example, Acetaminophen or paracetamol is the API in Panadol, Dolo, and Crocin. APIs is therefore required for the production of drugs for many kinds of illnesses like flu, aches, diabetes, cancer, AIDS, malaria, infections.

Status of India’s Pharma in the world

The pharmaceutical industry in India is third largest in the world, in terms of volume, behind China and Italy, and fourteenth largest in terms of value. It has a strong network of 3,000 drug companies and about 10,500 manufacturing units with a domestic turnover of Rs 1.4 lakh crore (USD 20.03 billion) in 2019, with exports to more than 200 countries in the world. Import of APIs has increased in substantially because of cheaper import options from countries like China. Manufacturing of certain APIs has almost stopped in India.

The pharmaceutical market in China has grown rapidly in the past few years. In 2007, China had the ninth largest market. Now, China’s market is the second largest globally, next to only the US. China is the global leader in production and export of APIs contributing to one-fifth of the global API output by volume. China’s production capacity is above 2 million tons per annum.

Why China is the best in APIs production?

Its not only India, other countries too dependent on China for APIs. See below chart, how China exports to countries: Data is of May 2019. 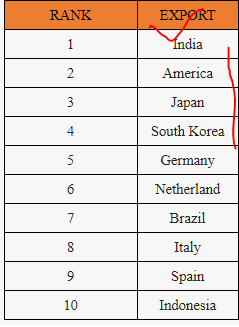 India’s effort and steps to do something in APIs:

The Indian government has been trying many different policy initiatives to support pharmaceutical industries for many years now.

The Indian government is currently advocating for Atmanirbhar Bharat or self-sufficient India to revive the economy post the economic slowdown caused by COVID-19. A package to revive the API industry in the country has been announced as a part of the scheme.

News: Three Apple Inc.’s top contract manufacturers are planning to invest a total of almost $900 million in India in the next five years to tap into a new production-linked incentive plan. Now, we will see Production linked incentive scheme 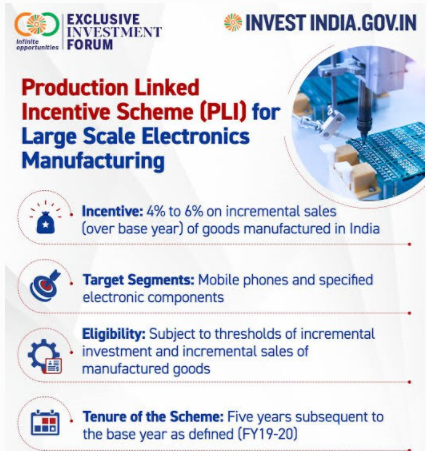 About the PLI scheme:

It offers a production linked incentive to boost domestic manufacturing and attract large investments in mobile phone manufacturing and specified electronic components, including Assembly, Testing, Marking and Packaging (ATMP) units. The Scheme would tremendously boost the electronics manufacturing landscape and establish India at the global level in electronics sector.

Key features of the scheme:

What kind of investments will be considered?

All electronic manufacturing companies which are either Indian or have a registered unit in India will be eligible to apply for the scheme. These companies can either create a new unit or seek incentives for their existing units from one or more locations in India. However, all investment done by companies on land and buildings for the project will not be considered for any incentives or determine eligibility of the scheme.

Astronomers have found a rogue planet, which is about the same mass as Earth 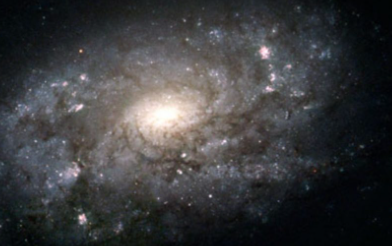 Astronomers have found a rogue planet, which is about the same mass as Earth, seemingly adrift in the Milky Way, without being a part of any star system. Such planets are called rogue planets, and this new planet is considered to be a low mass planet.

Finding rogue planets is extremely challenging because, unlike stars, planets do not emit light of their own. The team behind the discovery used the gravitational microlensing technique to find the planet.

Planets form in protoplanetary discs, which is a swirling flat disc of dust, rock, and gases that form around a star being born. But astronomers theorize that very early in the planetary formation process, some low mass planets could get ejected from their host star’s gravitational control due to the high energy nature of planetary formation processes. As we discover more and more exoplanets, astronomers also estimate that there could potentially be millions of such free-floating rogue planets in every galaxy.

Under the India-Denmark 'Green Strategic Partnership', a joint statement said, the "ambitious goals and actions will be identified within the areas and outlined in an Action Plan that will be worked out and endorsed as soon as possible".

Further emphasizing on the strategic partnership, the statement read: "The Green Strategic Partnership is a mutually beneficial arrangement to advance political cooperation, expand economic relations and green growth, create jobs and strengthen cooperation on addressing global challenges and opportunities; with focus on an ambitious implementation of the Paris Agreement and the UN Sustainable Development Goals."

The Ministry of Commerce and Industry has also signed a Memorandum of Understanding (MoU) for Intellectual Property (IP) Cooperation with Denmark. The MoU aims at increasing IP co-operation between the two countries by way of, exchange of information and best practices on processes for disposal of applications for patents, trademarks, industrial designs, and Geographical Indications, and cooperation in the field of protection of Traditional Knowledge. 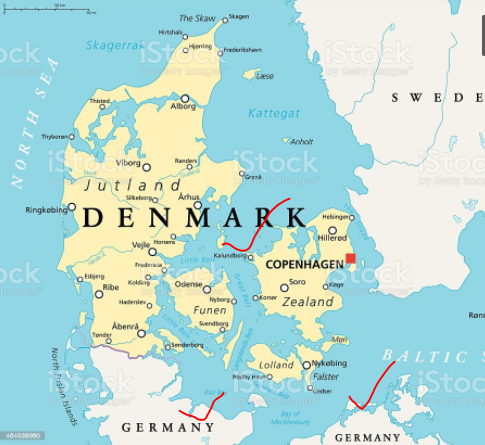 Ministry of Road Transport and Highways has allowed use of H-CNG (18% mix of hydrogen) in CNG engines.

In a step towards promoting alternative clean fuel for transportation, the Union road transport and highways ministry has notified hydrogen-enriched compressed natural gas (CNG) as an automobile fuel. An ideal blend of 18% hydrogen in CNG can be used as automotive fuel after compression. This can lower emissions and promote green fuel for automobiles in the country. It can also reduce carbon monoxide emission by 70%, according to a study. 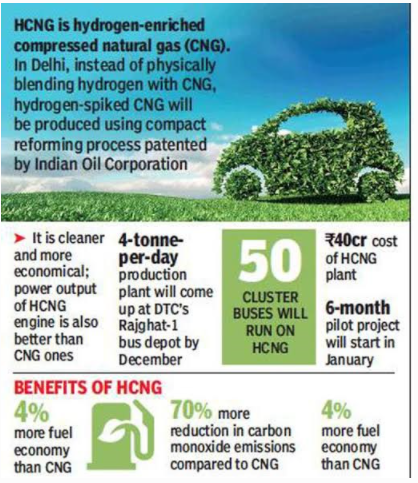 When used in an internal combustion engine, even the addition of small amount of hydrogen to natural gas (5-30% by volume) leads to many advantages, because of some particular physical and chemical properties.

Some of the most notable features are as given below: