According to a SAFAR (System of Air Quality and Weather Forecasting and Research under the Central government) estimate, early burning of crop residue is taking place in Punjab. The data is based on harmonizing the INSAT-3, 3D and NASA satellite, the fire counts were around 42 on September 21, 2020.

Govt. of India, has introduced a major national initiative, "System of Air Quality and Weather Forecasting and Research" known as "SAFAR" for greater metropolitan cities of India to provide location specific information on air quality in near real time and its forecast 1-3 days in advance for the first time in India. It has been combined with the early warning system on weather parameters.

Who has developed it?

The SAFAR system is developed by Indian Institute of Tropical Meteorology, Pune, along with ESSO partner institutions namely India Meteorological Department (IMD) and National Centre for Medium Range Weather Forecasting (NCMRWF). The implementation of SAFAR is made possible with an active collaboration with local municipal corporations and various local educational institutions and governmental agencies in that Metro city.

The ultimate objective of the project is to increase awareness among general public regarding the air quality in their city well in advance so that appropriate mitigation measures and systematic action can be taken up for betterment of air quality and related health issues. It engineer’s awareness drive by educating public, prompting self-mitigation and also to help develop mitigation strategies for policy makers.

How the monitoring is done?

Air Quality monitoring is not an easy task, the common mistake which any one can do is representing city air quality based on single station value or single hour data.

This is the first of such kind of network in India which continuously monitors all these parameters and maintain up to date data base with robust quality control and quality assurance.

News was: EPCA raises red flag over Jhilmil industrial area, Anand Vihar ISBT. But EPCA is very important body. We need to know about this.

The EPCA was constituted with the objective of protecting and improving the quality of the environment and preventing and controlling the environmental pollution in the National Capital Region, under the provisions of the Environment (Protection) Act, 1986. It was first constituted in 1988. 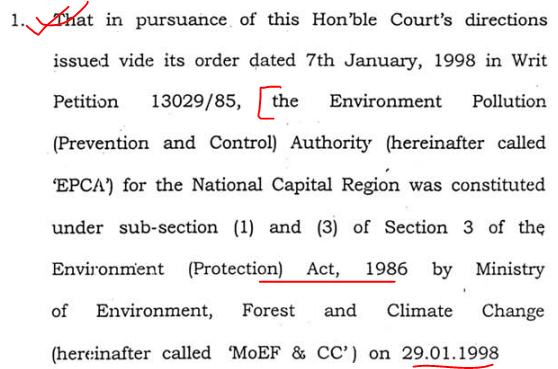 So, it is a permanent body?

NO. Though it has existed for 20 years, its term is extended by specific notifications issued by the Government of India. The latest notification is dated October 3, 2018, when it was reconstituted by including new members.

EPCA was reconstituted with 20 members after the expiry of its last tenure in 2018.

The Cabinet Committee on Economic Affairs (CCEA) notifies MSP based on the recommendations of the Commission on Agricultural Costs and Prices (CACP). These recommendations are made separately for the Kharif marketing season and the Rabi marketing season. Post harvesting, the government procures crops from farmers at the MSP notified for that season, in order to ensure remunerative prices to farmers for their produce.

How are the MSPs fixed?

The CACP considers various factors such as the cost of cultivation and production, productivity of crops, and market prices for the determination of MSPs.

Hence, C2 approach is considered to be the most comprehensive approach which can be used to calculate the MSP.

The National Commission on Farmers led by M.S. Swaminathan had recommended for the adoption of C2 Approach for fixing the MSP. However, presently, the MSPs are fixed at least 50% more than cost of production as calculated according to A2+FL approach.

Limitations in the MSP Regime

The MSP Policy of the Government has come under immense criticism on account of number of reasons. These flaws with the MSP regime have been highlighted by number of committees such as the Committee on Doubling Farmers' income which was headed by Ashok Dalwai. Some of these fundamental flaws include:

In order to address these problems associated with the MSP regime, the Government has unveiled the PM-AASHA scheme. The Government has to effectively implement the PM-AASHA Scheme so as to improve the agricultural outcomes. Ultimately, the Government must realize that unless the prices received by the farmers increase, we would not be able to realize the vision of doubling farmers' income by the end of 2022. Pradhan Mantri Annadata Aay SanraksHan Abhiyan (PM-AASHA) is an umbrella scheme aimed at ensuring remunerative prices to the farmers for their produce. 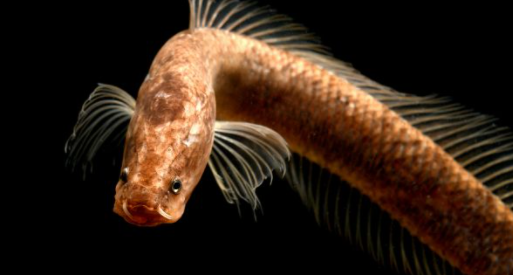 A team of scientists have determined that a species of snakehead fish discovered in the Western Ghats in Kerala belongs to a unique family distinct from fish species found in the world.

Rajya Sabha Deputy Chairman Harivansh’s refusal to conduct a division of votes on two controversial pieces of legislation on Sunday, despite persistent demands from members, was unprecedented in its sheer brazenness.

During the point of order to be raised, he did not allow many members opposing the “anti-farmer bill” to even speak, purported to extend the session beyond 1pm on September 20. As per the convention of parliament, the House functions with the consensus of all political parties. This was specifically pointed out by Leader of Opposition Ghulam Nabi Azad.

In parliamentary procedure, a point of order occurs when someone draws attention to a rules violation in a meeting of a deliberative assembly. 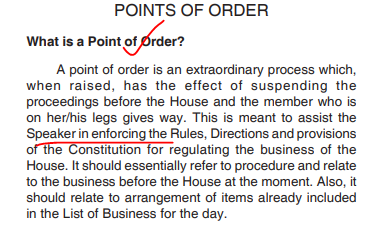 What is a Point of Order?

Rule 258 of the Rules of Procedure and Conduct of Business in Rajya Sabha makes a provision to enable a member to raise a point of order.  It provides as follows:

Point of Order is also raised on similar line in Lok Sabha.