The National Statistical Office under the Ministry of Statistics and Programme Implementation (MOSPI) recently released the report on Household Consumption on Education in India. The report is an outcome of the 75th round of National Sample Survey (NSS) conducted between July 2017 and June 2018.

Type of institution: This referred to the type of management by which the institution was run. It might be run by Government (Central/State/Local) or a private body irrespective of whether receiving government aid. Thus, the types of Institutions were: (a) Government, (b) Private aided and (c) Private unaided.

The report revealed around 3 students out of 5 students in classes I to XII, attended government schools. The report revealed that, except at the pre-primary level of education, majority of the students who were undergoing formal education attended government run educational institutions. At least 60% of the students in classes I to XII went to government schools as per the NSS DATA. Around 21% are private and about 5% are private aided schools. See below image: 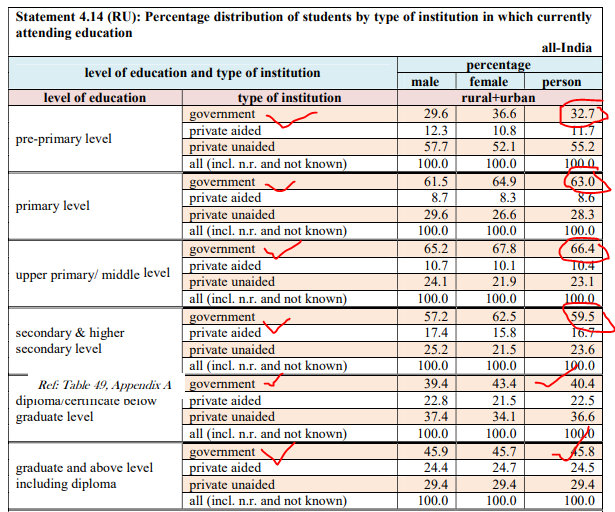 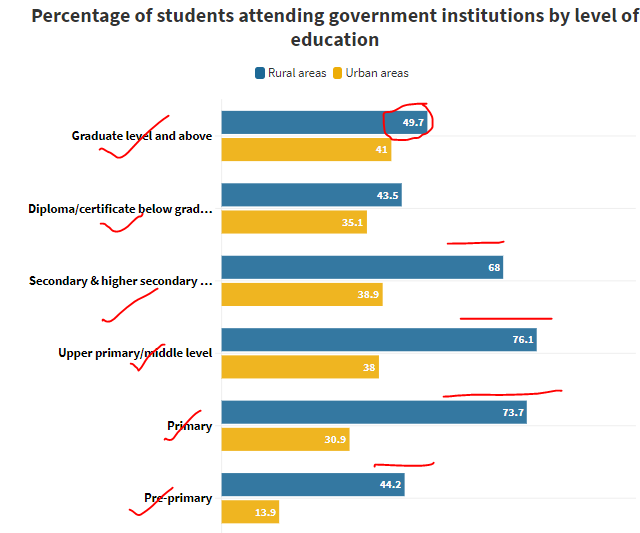 The most import part of the Report was Quality of Education. 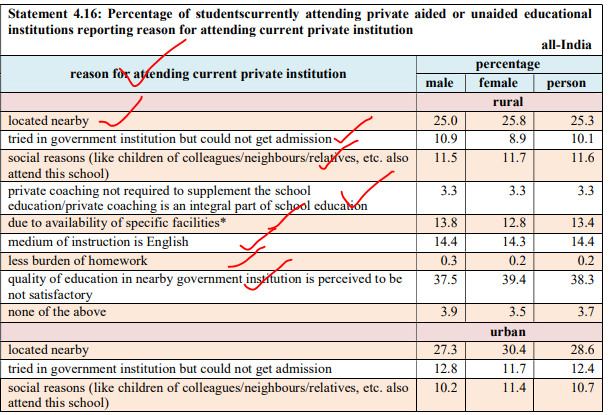 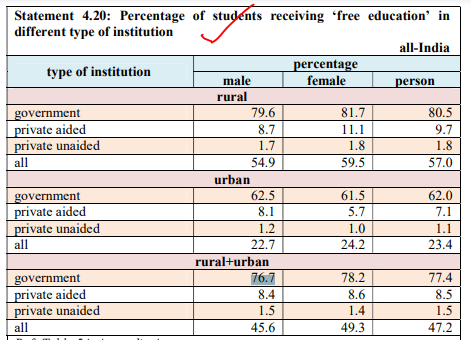 Just start with introduction and then we will see few images in which we will see the status of Green Finance in India.

The Landscape of Green Finance in India is a one-of-a-kind study undertaken by Climate Policy Initiative (CPI) that presents the most comprehensive information on green investment flows in the country in FY 2017-FY 2018. The study tracks both public and private sources of capital and builds a framework to track the flow of finance from source to end beneficiaries. This report helps understand the nature and volume of green financial flows in the country and identifies the methodological challenges and data gaps in conducting a robust tracking exercise.

The total green finance tracked in this study includes both public and private finance flows, provided by both Indian entities and international organizations. 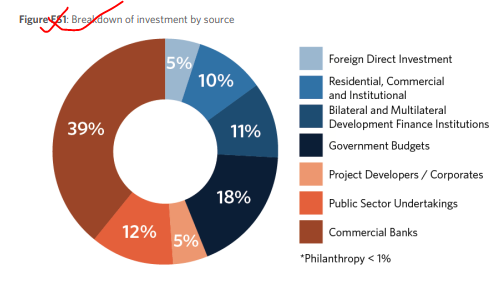 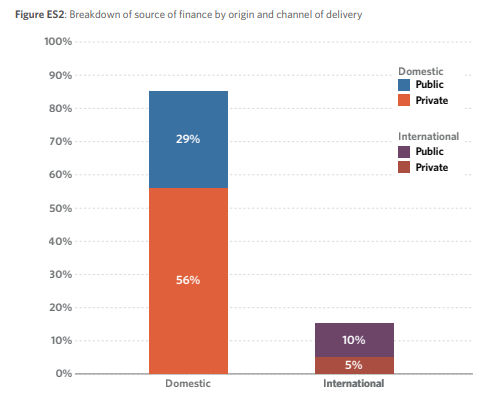 Debt, through project or corporate finance, was the largest financial instrument used to channel green finance. 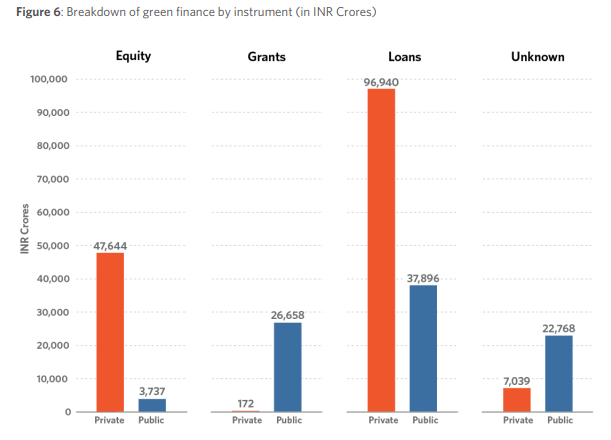 The power generation sector accounted for nearly INR 199 thousand crores over the two years tracked in this study.

. In 2017, total new renewable energy investments increased by 19% over 2016 levels and were driven largely by an increase in capacity additions in both solar and wind energy. 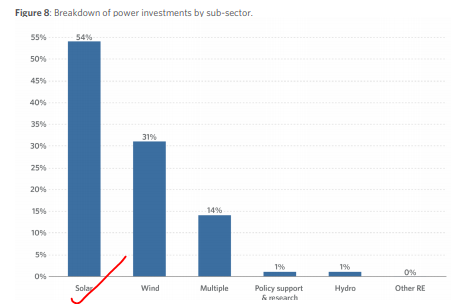 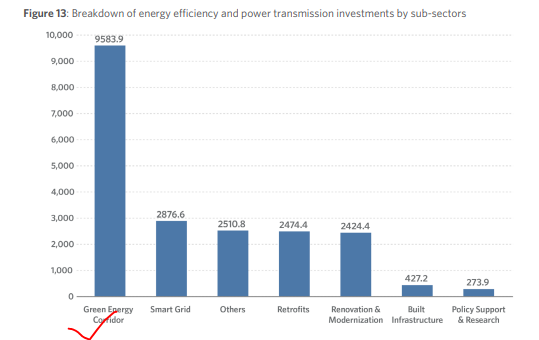 Electronic waste (e-waste) generation in India increased by over 43 per cent between 2017-18 and 2019-20, according to the written statement presented by Union minister in the Lok Sabha. E-waste increased to over one million tonnes, from an estimated 0.7 million tonnes in three years.

Now, anytime they ask you about e-waste in Mains or essay, just use the latest data given below: Don’t remember any data after this. 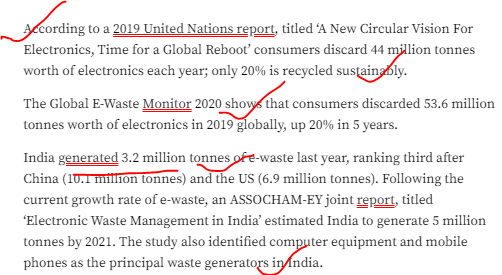 The Ministry of Environment, Forest and Climate Change notified the E-Waste Management Rules, 2016 on 23 March 2016 in supersession of the e-waste (Management & Handling) Rules, 2011.

Now we will see the salient features of this Bill:

2. It mandated extended producer responsibility (EPR) for all plastic producers, importers and brand owners (PIBOs). ERP is a mechanism through which producers are made responsible for handling and recycling end-of-life products.

3. Compact Fluorescent Lamp (CFL) and other mercury containing lamp brought under the purview of rules.

5. Deposit Refund Scheme has been introduced as an additional economic instrument wherein the producer charges an additional amount as a deposit at the time of sale of the electrical and electronic equipment and returns it to the consumer along with interest when the end - of - life electrical and electronic equipment is returned.

6. The manufacturer is also now responsible to collect e - waste generated during the manufacture of any electrical and electronic equipment and channelize it for recycling or disposal and seek authorization from State Pollution Control Board (SPCB)

7. The roles of the State Government have been also introduced in the Rules in order to ensure safety, health and skill development of the workers involved in the dismantling and recycling operations.

8. Department of Industry in State or any other government agency authorized in this regard by the State Government is to ensure earmarking or allocation of industrial space or shed for e - waste dismantling and recycling in the existing and upcoming industrial park, estate and industrial clusters.

9. Department of Labour in the State or any other government agency authorized in this regard by the State Government need to ensure recognition and registration of workers involved in dismantling and recycling.

10. State Government to prepare integrated plan for effective implementation of these provisions, and to submit annual report to Ministry of Environment, Forest and Climate Change.

11. Liability for damages caused to the environment or third party due to improper management of e - waste including provision for levying financial penalty for violation of provisions of the Rules has also been introduced.

12. Urban Local Bodies (Municipal Committee/Council/Corporation) has been assign the duty to collect and channelized the orphan products to authorized dismantler or recycler.

13. The import of electrical and electronic equipment shall be allowed only to producers having Extended Producer Responsibility authorisation.

The Comptroller and Auditor General (CAG) has recently questioned India’s offset policy and came down heavily on foreign vendors for not fulfilling their offset commitments. In its report titled ‘CAG’s Performance Audit Report on Management of Defence Offset’, the CAG has pointed out that French aerospace major Dassault Aviation and European missile maker MBDA, which supplied armaments for the Rafale jets, have not yet discharged their 30% offset obligation.

The CAG has highlighted that most of the time Foreign vendors such as Dassault Aviation give commitment for offsets in order to win the tender, but later on do not fulfil their commitments. In this case, Dassault Aviation was required to transfer the technology to DRDO for the indigenous development of Kaveri Engine for the Light Combat Aircraft (LCA) Tejas. However, it has failed to do so.

The CAG has pointed out that between 2005-2018, 46 contracts with offset commitments worth Rs 66,000 crores was made by foreign vendors. However, so far only Rs 11,300 crore has been realized. Accordingly, there is a need to have a relook at our Defence Offset policy to promote indigenisation of defence Industry.

The Government has collected around Rs 2.75 lakh crores in 2018-19 through the imposition of various cesses. Usually, the proceeds of such cess are initially credited to the Consolidated Fund of India and later on, with the Parliament's approval, the proceeds are transferred to separate dedicated funds. However, in a recent report, CAG has highlighted that Central Government has not transferred more than Rs 1.1 lakh crores to dedicated funds. The proceeds have continued to remain part of consolidated fund of India.

A cess is considered to be "Tax on tax". It is levied by the government for a specific purpose. Cess collected for a particular reason has to go towards the purpose for which it was charged. It cannot be used for, or diverted, to other purposes. For example, Health and Education Cess is imposed at 4% on major central taxes such as Corporate Tax and Income Tax. It is to be used only for the promotion of education and health and cannot be diverted for other purposes.

How is it different from Tax?

Any tax collected goes into Consolidated Fund of India (CFI) which can be allocated for any purpose. However, Cess is a different form of tax and may initially get credited to the CFI but has to be ultimately used for the purpose for which it is imposed. In order to utilize the cess proceedings, the government has to create a dedicated fund. The proceeds of such funds are non- lapsable. Example: Prarambhik Shiksha kosh (Primary Education), Madhyamik and Uchchtar Shiksha kosh (Secondary and Higher Education).

Further, unlike the normal taxes, Cess fund need not be shared by the Central Government with State Governments. Government also resorts to Cess as it is easy to introduce, modify and abolish compared to normal taxes as any change in normal tax need to go through a lot of procedure. Examples of some important Cesses in India

Health and Education Cess: It is imposed at 4% on major central taxes such as Corporate Tax and Income Tax. The Government has set up separate funds such as Prarambhik Shiksha kosh (Primary Education) Madhyamik and Uchchtar Shiksha kosh (Secondary and Higher Education) to transfer the cess collected.

Cess on Crude oil: The Oil Industry (Development) Act, 1974 provides for collection of cess as a excise duty on indigenous crude oil. The cess was levied at Rs 60 per tone in July 1974 and subsequently revised from time to time. The Cess is currently levied at the rate of 20 per cent of the value of oil. The cess first gets credited to the Consolidated fund of India and from there it is transferred to Oil Industry Development Fund.

Cess on Bidi: It is provided under THE BEEDI WORKERS WELFARE CESS ACT, 1976. It is a form of excise duty which is imposed on the manufactured beedis. The proceeds of this cess is directly credited to the Consolidated fund of India and is used for the welfare of the bidi workers.