The 3 Farmers Bills and the controversies surrounding them

Farmers in many states are protesting against three recent bills passed by the Parliament.

The controversy pertains to:

Before reading: Read below paragraph.

Many states have passed laws to mandate agricultural trade only through APMCs with the aim of protecting farmers from exploitation and to ensure fair prices for the produces. The Bill seeks to eliminate such restrictions.

As per its Statement of Objects and Reasons, the regulatory framework of APMC laws "hindered the freedom of choice-based marketing and also the inflow of investment in the development of alternative markets and marketing infrastructure". 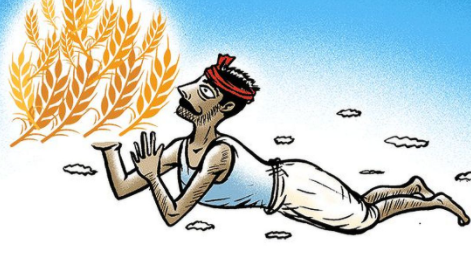 In simple terms, this Bill seeks to permit the sale of agricultural produces outside the markets(mandis) regulated by the Agricultural Produce Marketing Committees (APMCs) constituted by different state legislations.

It prohibits state governments from levying any market fee, cess or levy on farmers, traders, and electronic trading platforms for trade of farmers’ produce conducted in an ‘outside trade area’.

A key provision of the Bill is Clause 14, which gives it an overriding effect over the inconsistent provisions of the State APMC Acts. Also, the Central Government has been given powers to frame rules and regulations under the Act. Thus, an intention to centralize and homogenize the regulations relating to agricultural trade is evident. This is the reason of protest.

Do currently all states have APMCs?

In this regard, it may be noted that all states do not have the APMC system. Bihar had abolished it in 2006. Kerala, Manipur, Andaman & Nicobar Islands, Lakshadweep Islands, Dadar & Nagar Haveli and Daman & Diu do not have Agricultural Produce Market Committee (APMC) Act. While Sikkim does have APMC Act but is not implemented.

One important features of this Bill:

The Central Government may develop a Price Information and Market Intelligence System for farmers’ produce and a framework for dissemination of information.

What are things are not included in the definition of “Trade Area”?

The definition of 'trade area' as per Clause 2(m) of the Bill specifically excludes "market yards, sub-market yards and market sub-yards managed and run by the market committees formed under each state APMC (Agricultural Produce Market Committee) Act" and "private market yards, private market sub-yards, direct marketing collection centres, and private farmer-consumer market yards managed by persons holding licenses or any warehouses, silos, cold storages or other structures notified as markets or deemed markets under each State APMC Act in force in India".

Now, we will jump to second Bill:

Otherwise, the government has the power to regulate the production, supply, distribution etc. of such food items even "for securing their equitable distribution and availability at fair prices".

Now why comprehensions and protest around the Bills? The major points of criticism raised by protesting groups are: 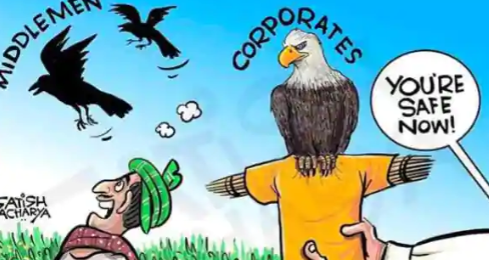 On the other hand, the government points out that there is no clause to abolish the APMC system and that the laws are instead expanding the choices of farmers to trade outside APMC. But the protesters say that the bill, with its overriding powers over state legislation, will eventually create an atmosphere to weaken the APMC system.

Now more than this is not required. Let political fight continue. You move ahead... to next topic.

Very small concept under this. Do learn

Parliament has passed the Jammu & Kashmir Official Languages Bill, 2020, to declare certain languages as official languages of the UT.

Prior to this, Urdu has been the sole official language in J&K, for over 130 years. A small history:

It may be noted that the J&K Re-Organisation Act empowers the J&K legislative assembly to decide on the adoption of official languages. Thus, some MPs opposed Bill. However, the Government clarified thus: Read section 47 below.

So, why Parliament has passed this?

Have other UTs have adopted any official language?

The Pondicherry Official Language Act, enacted in 1965, adopted Tamil as the official language, and Malayalam and Telugu as official languages in Mahé and Yanam regions of the UT, respectively.

The assembly of the National Capital Territory of Delhi also enacted a law to adopt Urdu and Punjabi as second official languages of the UT.

The adoption was in line with the European Green Deal, which was presented by the Commission in December 2019 as a roadmap for making the EU's economy sustainable and achieving climate neutrality by 2050. The EU's revised Emission Trading System (ETS) State aid Guidelines, which will enter into force on January 1, 2021, will replace the previous guidelines adopted in 2012.

Potassium is one of the most important macronutrients for plants. Plants require, among other things, a high and relatively stable concentration of potassium ion to activate many enzymes that are involved in respiration and photosynthesis. Potassium is also involved in key cellular processes such as energy production, and cell expansion.

Availability of Potassium to plants is limited:

However, despite being among the most abundant minerals in the soil, its availability to plants is limited. This is because most of the soil potassium (about 98 per cent) is in bound forms and its release into the soil solution is far slower than the rate of its acquisition by the roots.

According to study, targeting a specific plant hormone would help rice plants have greater tolerance to potassium deficiency, in turn, improving rice productivity. The plant hormone called Jasmonate (JA) is often associated with the plant’s defence against biotic factors like insects, pests and other pathogens. 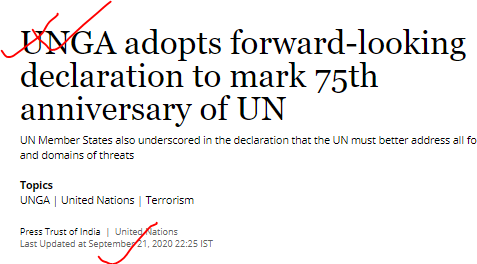 The UN General Assembly adopted by consensus on 21 September 2020 a forward-looking declaration on the commemoration of the 75th anniversary of the world body that calls for strengthening mechanism to combat terrorism, reformed multilateralism, inclusive development and better preparedness to deal with challenges like the COVID-19 pandemic.

The landmark 'Declaration on the Commemoration of the 75th Anniversary of the United Nations' was adopted at the high-level meeting of the 193-member Assembly to commemorate the milestone anniversary of the world body.

It notes that the world of today is not yet the world our founders envisaged 75 years ago. It is plagued by growing inequality, poverty, hunger, armed conflicts, terrorism, insecurity, climate change, and pandemics. We need to work together.