If you learn about basic about any body, you will never forget. Read now. 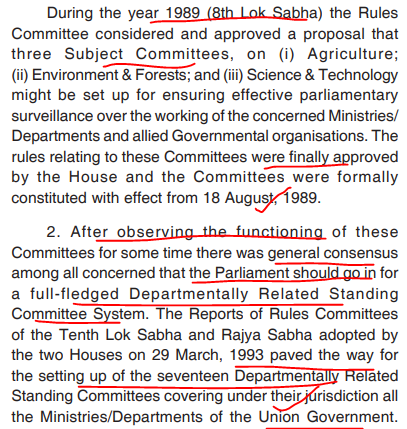 These DRSCs replaced the earlier three Subject Committees constituted in August 1989. The 17 Departmentally Related Standing Committees were formally constituted with effect from April 1993.  After experiencing the working of the DRSC system for over a decade, the system was re-structured in July 2004 wherein the number of DRSCs was increased from 17 to 24.

Ok, one thing you remember here, that DRSC, are mentioned in the Rules of House of both Lok Sabha (331C) and Rajya Sabha (268).

Minister not to be a Member of the Committee: 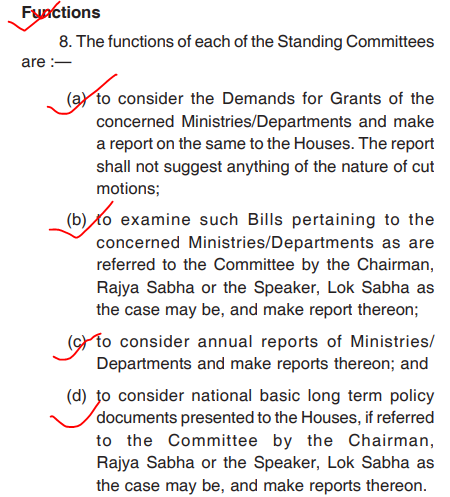 Because of the uncertainties around COVID-19 induced lockdowns and the economic slowdown, multiple international rating agencies have been revising their GDP growth estimates for 2020 and beyond. 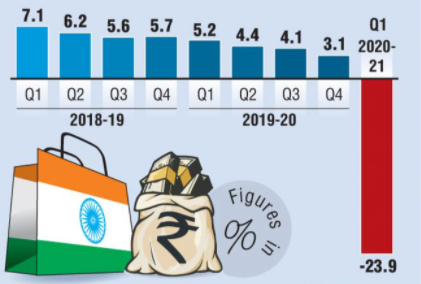 Not just in India, but globally, many economies have contracted in the April-June quarter of 2020. Gradually economic activity is also picking up in a phased manner and hence, we might see improved GDP numbers for the July to September quarter of 2020 in India.

Today we will GDP forecast for India as well as few other major economies, as predicted by multiple prominent agencies.

As per Fitch’s forecast in March 2020, the global growth was projected at 1.3% which was later re-estimated at -4.4% in September 2020. Since COVID-19 cases in India were low in March 2020, India’s GDP growth for financial year 2020-21 was projected to contract by 5%. After recording one of the sharpest GDP contractions in the world in the first quarter of 2020-21, India’s GDP projection for 2020-21 has been slashed to -10.5% due to ‘looming deterioration in asset quality in the financial sector’.

Among the neighbouring countries, Maldives GDP is expected to contract by 20.5%, more than India’s, whose GDP has been forecast to contract by -9% (from -4% projected in June 2020). 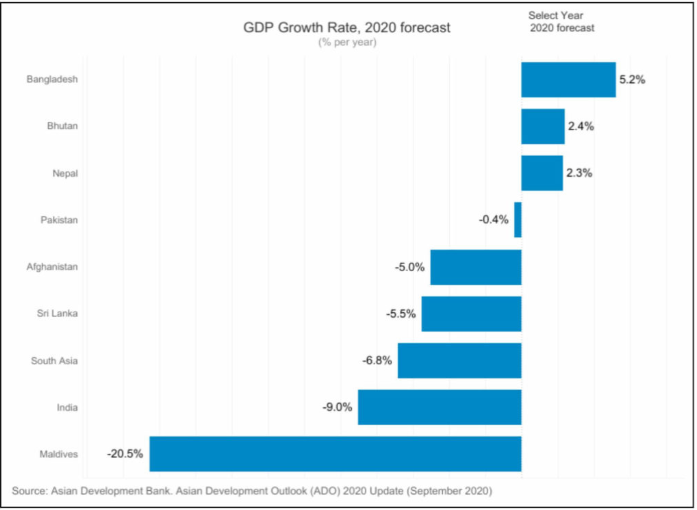 The finance ministry, in its monthly economic report for August 2020 stated that India is witnessing a sharp V-shaped recovery.

However, there is still a lot of uncertainty around the pandemic and its effect on the economy. Wait and wait how government handles such situation.

Biotech-Krishi Innovation Science Application Network (Biotech-KISAN) is a Department of Biotechnology, Ministry of Science and Technology initiative that empowers farmers, especially women farmers. It aims to understand the problems of water, soil, seed and market faced by the farmers and provide simple solutions to them.

The Scheme is for farmers, developed by and with farmers, it empowers women, impacts locally, connects globally, is Pan-India, has a hub-and spoke model and stimulates entrepreneurship and innovation in farmers.

For Farmers: The Biotech-KISAN is a Farmer centric scheme launched by of the Department of Biotechnology, where scientists will work in sync with farmers to understand problems and find solutions.

By Farmers: Developed in consultation with the farmers.  Soil, Water, Seed and Market are some key points that concern small and marginal farmers. Biotech-KISAN aims to link farmers, scientists and science institutions across the country in a network that identifies and helps solve their problems in a cooperative manner.

Empower women. The woman farmer is often neglected. It is important to empower the women farmer, help her meet her concerns for better seed, storage of seed and protection of the crops from disease and pest. The women farmer is also the prime caretaker of livestock and she is eager to combine traditional wisdom in handling the livestock and with current best practices, especially in the context of emerging livestock disease. The scheme includes the Mahila Biotech- KISAN fellowships, for training and education in farm practices, for women farmers.  The Scheme also aims to support the women farmers/ entrepreneur in their small enterprises, making her a grass root innovator.

Connects Globally: Biotech-KISAN will connect farmers to best global practices; training workshops will be held in India and other countries. Farmers and Scientists will partner across the globe.

Impacts Locally: The scheme is targeted towards the least educated marginalised farmer; Scientists will spend time on farms and link communication tools to soil, water seed and market. The aim is to understand individual problems of the smallholding farmers and provide ready solutions.

Across India: Biotech KISAN will connect farmers with science in the 15 agro-climatic zones of the country in a manner, which constantly links problems with available solutions.

Hubs and Spoke: In each of these 15 regions, a Farmer organisation will be the hub connected to different science labs, Krishi Vigyan Kendra and State Agriculture Universities co-located in the region. The hub will reach out to the farmers in the region and connect them to scientists and institutions.

Farmers as Innovators: The hub will have tinkering lab, communication cell and will run year-long training, awareness, workshops and which will act as education demonstration units to encourage grass root innovation in the young as well as women farmers.

Communicating Best Practices: There will be a communication set-up to make radio and TV programmes for local stations, as well as daily connectivity through social media.

They won’t ask anything apart from this.

Very important Article. So many questions from Prelims can be formed. Do read each line.

DRDO's successful test of a Hypersonic Technology Demonstrator Vehicle this month is a result of several indigenous tech achievements and know-how obtained over two decades. With this successful test of the Hypersonic Technology Demonstrator Vehicle, India will be making its first hypersonic missile in the next five years. India is the fourth country in the world after the US, China and Russia to develop and test the technology that will pave the way for missiles that will travel at six times the speed of sound.

Why this vehicle is unique?

Typical engines on airplanes, rockets, and missiles burn a mixture of fuel and oxidizer (combustion) to generate power, which is then used to create thrust forces to propel the vehicle. Unlike the gas turbine engines found on commercial transport airplanes, ramjets have no moving or rotating mechanical parts. At supersonic speeds, a stream of fast-moving air from the atmosphere, which contains oxygen, rushes into the engine. Fuel is injected into this airstream inside the engine, and a fast-moving mixture of fuel and oxygen is created. This mixture is ignited to initiate combustion and generate thrust. The ramjet engine is what powers the Brahmos cruise missile.

A scramjet, works on similar concepts as a ramjet but is designed for operation at even higher flight speeds, going into the hypersonic territory.

What is the major challenge associated with scramjet?

One of the key challenging aspects of a scramjet is that the air ingested by the engine flows through at very high speeds — this internal air-flow speed is itself supersonic.

Now, this challenge has been accepted by India.

The challenges mentioned above has been met by HSTDV powered by a scramjet, through intricate design that performs careful conditioning of the internal airstream and promotes a stable and continuous combustion process for steady engine operation.

Apart from this wonderful technology, more technology gaps need to be answered. Government should try to rope in more private institutions and create an ecosystem that enables synergy between industry and government-funded organizations/institutes for building advanced field-ready technologies augurs well for realizing the vision of an Atmanirbhar Bharat. 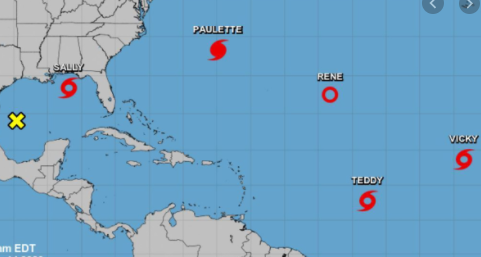 A rare climatic event occurred in the Atlantic Ocean on September 14, 2020: Five storm systems — hurricanes, storms and depressions — were brewing in the ocean at the same time for only the second time on record.

The last time such an event occurred was nearly half-a-century ago, in September 1971.